We were good this year Santa left no coal at our home.


Hola amigos, we went to Mexico on a 7 day cruise and fell in love with Mexico all over again. Bob and Jeanette came with us and we even had adjoining rooms on board ship. The ship itself was magnificent. The rooms were spacious, the bed comfortable and you could almost turn around in the showers. 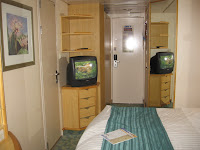 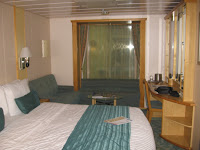 You can so eat 24 hours a day on board a cruise ship - we didn't, but you can. The meals in the main dining room in the evening were wonderful and we all enjoyed all the various types of entertainment they offered on board ship. We had no bad weather so it was smooth sailing both ways.

We had a day at sea after we boarded to familiarise ourselves with the ship - finding all the places that were on board as well as where they were. Spent the day by the pool enjoying the warm sunny day.

Our first port of call was Cabo San Lucas - it felt like coming home. We walked quite a bit on the Malecon (boardwalk), window shopped as this area is really the diamond district and then wandered in the downtown area. We finally decided that it was time for lunch so we took a taxi up to Latitude 22. This is a restaurant that other friends introduced us to on our very first trip to Mexico and we have made it there at least once a year when in Mexico. Enjoyed some great food and some even better margaritas. 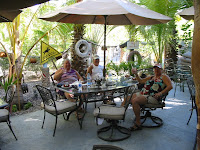 Our next port of call of Mazatlan. This is the first time we had ever been to mainland Mexico so we were pretty excited about arriving. When we arrived it was very foggy which apparently is very unusual, but it was still hot and extremely muggy with humidity. 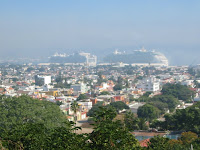 We happened upon a van driver who spoke English extremely well and for $20. each he would give us a tour of his city. I think that was the best $20 we ever spent. He told us 3 hours - it was more like 6 hours by the time we made it back to the ship. We met another couple from another ship and we were joined by another couple from our ship. The nine of us piled into his van and went touring around the city. Every so once in a while we would say - we want to see this and there we went. He took us to a great jewellery store that supplies free margaritas while you shop - the more you drink - the more you buy - great sales pitch - oh and the margaritas were delicious. I purchased some pretty metal hummingbirds for our bathroom and Bob bought Jeanette a beautiful ring.

We were taken to watch some cliff divers and Bob was able to get a good picture. When I tried with our camera, I pressed the button when he jumped, he landed in the water and then our camera took the picture. Thanks Bob. Time for a new camera. 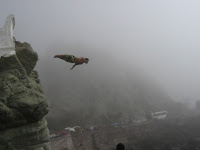 Off we went to this great restaurant that Lalo (our driver) recommended and the 8 of us sat together for our meal and talked and laughed. The other couple from our ship were celebrating their wedding anniversary so they were given balloon hats and sang to by the waiters. We made it back to the ship on time to board - gave our driver a great tip. 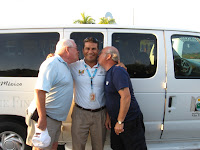 We even made arrangements for his cousin in Puerto Vallarta to pick up Bob and Jeanette and the other couple from our ship to take them around in PV.

The next day was Puerto Vallarta. We had made plans before we left Alberta to meet our friend Glinys from the lake when we arrived. We got off the ship, saw Lalo's cousin Hector for a minute and told him the others were coming and headed out to see if we could find Glinys. Well the smart lady that she is figured out which gate we would be leaving by and there she was to welcome us to her Mexican home. I had told her that I wanted to see her Mexican home that she shares with another friend from the lake Judy. Unfortunately Judy had already gone back to Canada for Christmas so we missed seeing her. Glinys has a lovely little house there. All we really saw was the living room and her bedroom as the rest of her place seemed like a warzone as it was being painted. We stayed there for a while visiting before heading out. 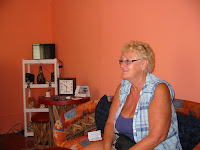 We told her what we wanted to see and she told us what she wanted to show us about her area.

One of the things that our ship did was to stay on Pacific time no matter which port we were in, so when we arrived in PV it was 7:30 am to us but it was actually 9:30 am to Glinys. Before we left to go to Bucerias where some of here former neighbours live she gave us shot of some really, really smooth sipping tequila (at 8:30 in the morning for us mind you). Does that give you an indication of how the day went?

Caught a taxi to take us to Walmart where we caught a bus to take us to Bucerias where Garry came to get us to drive us to his house. We visited with them for our 1.5 hours before it was time for Garry to drive us back to Bucerias to catch the bus to go downtown to pick up the final free gift that we could get from the diamond store.

Ran into Bob and Jeanette at the diamond store. They told us the other couple from the ship never showed up so Hector turned them over to another driver and they got a great tour of the city. They decided to go back to the ship while we still had one last stop. Benjamin's restaurant. Glinys met Benjamin a few years ago and they became great friends. He has opened a restaurant and Glinys has helped him at times so we wanted to meet him and see the restaurant. 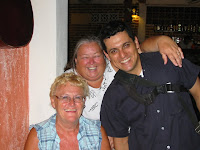 What a wonderful group of people they are. We started out with margaritas - grandes of course. I think there were 3 of them in our glass that is how big they were. Then David made up some salsa right at our table - WOW was it delicious. 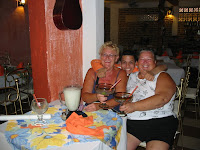 We then drank some of our margaritas - awesome but difficult to pick up so we drank from straws.

We then ordered some food - I believe it was called 3 Mexicans and a Gringo - starting to get the idea of what was going on. Had another margarita each, talking with Benjamin and David, taking pictures and then Glinys decided (I think) that we needed something else to eat - I know it had cheese, torillas and chorizo in it (can't remember the name though sorry) and another margarita each.

Glinys at one point left us to find a place that sells beer and brought Allan back 2 big beers that he wanted. Shortly after that we jumped or should I say fell into a cab to go back to the harbour to board the ship. It's a little fuzzy for me after that but suffice it to say we got back on board on time and the ship left PV and started the trek home.

Wow what a great day, the city of wonderful, the food was great, the people incredibly awesome and of course the margaritas - loaded for bear!

We spent the next 2 days on board ship cruising back to San Pedro (just south of Los Angeles). 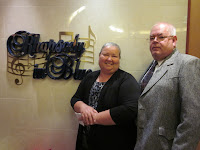 It was very windy outside so Jeanette and I tended to stay inside and play cards and recover from the 3 days of sightseeing (no hangover or feeling ill for me thank goodness). 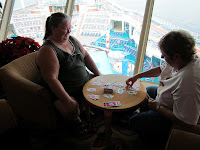 We arrived home on Sunday morning to rain and wind and cold weather. It is now Tuesday morning and I have a wonderful head cold. Oh well it was great while it lasted.

I will post more about on board the ship in the next few days or so.