However, it was again an interesting trip. We travelled on Wednesday and stayed at Dunigan, CA for the night. The pamphlet for the park said they had Wi-Fi, but it was not to be found. On Thursday, we drove over "The Grapevine". I think it gets to be over 5000 feet. And, in a short distance. The motorhome ran fine up and over. This is getting to be a good way to travel.

Three miles from camping World, it seemed to come to an end. The check engine light was on and the water temp was climbing over the 220 mark. Took an exit and pulled off to the side. After I was able to do my checking, I decided to use the Road Side Assistance that I had purchased before we left home. I called Coach-Net and it was decide that we were going to be towed to a repair facility. About an hour and one half later, a hugh tow truck showed up and hooked onto the Motor home. We had already disconnected the Toad. It is really neat seeing a 36 ft motorhome get the front end picked up and towed away. We got towed to a Truck center and they started on the over heating problem right away. First thing they did was to put in 3 1/2 gallons of antifreeze. We took it for about a ten mile drive and brought it back to the truck center. The water temperature had stayed right where it was supposed to. We waited for the engine to cool so that the mechanic could check everything out for leaks. Sue looked over and noticed a puddle forming under the Motor Home. After checking the engine bay out (the mechanic climbed into the bay by going thru the bed), a pin hole leak was found in one heater hose. Looks like it had been rubbing for a while. The hose was cut and replaced. While waiting for the connector, the mechanic when over the engone and reported that everything was dusty. That is a good thing, it was not leaking oil or other fluids. Just the way it is supposed to be. It is now close to 2:00 and we are on the road again. Temperatures are running right where they are supposed to be.

We arrived in Blythe at 5:30. We parked on the empty lot next to our Park Model, turned on the power, plugged into our shed. Then. off to supper. Our first meal of the season at Sizzlers. Back to the park and crash for the night.

Saturday, we started the transfer from the Motor Home to the Park Model. Got the internet turned on and life becomes good again. Tomorrow, we will finish emptying out the Motor Home, give it a wash and then move it over to the lot that we have permission to park on.


Well, it is two days latter and we have again spent too much money. But, it was stuff that needed doing. The speedometer now works all of the time and keeps working even when the headlights are turned on. It was a loose wire on the back. The heater control now works. They replaced the valve in the heater and it is stiff, but works. I was curious why the chassis battery had been dead when we left home so I had them check the "echo"charger. It was wired incorrectly. Also, they noticed that rather than using 4 batteries for the "house", we were using only 1. They installed the missing wire and now we have a 4 battery bank. I had the shocks checked and they were okay. However, the sway bar had worn bushing s that need replacing. The last thing that I had them look at was the rear seal. This is a seal between the engine area and the body. If it is loose, you can get dust circulating up and depositing itself on the ceiling. This shows up as dirty marks inside the coach.

We are a couple of days latter and will depart for Blythe tomorrow morning.


We left Portland on Friday morning and headed over to visit our friends in Powell Butte, OR. Drove through some more ran over Mt. Hood, but no snow. That is a good thing. We arrived around lunch time and John and Jeannie fed us lunch and then John, Keith and I went over to Beaver Motorcoach sales in Bend to allow me to ask questions. I was told that if we wanted to show up on Monday, the service had slowed down for the fall and we could get in to have a few things done.

We headed back to John and Jeannie's and John cooked up some steak (small roasts) on his pellet cooker. Man oh man did we eat too much.

We spent the weekend with John and Jeannie and are planning to head over to Beaver Motorcoach Sales/Bend Service Center to have a few things looked at.


New tires for the motorhome. We went over to Les Schwab tires and parted with some money. Tom, Bruce & Michelle, friends from Portland, son in law hustled and got all six tires done in about 1 1/2 hours. When we were done, back to the RV park.

When we bought the motorhome, the dealer included a starter pack for water and sewer. Problem with this starter pack is that it has only a 10 ft sewer hose. And, as you know, the sewer connection is never within 10 ft of the sewer. So, as we drove into our stall, I stopped to empty the tanks. Then I pulled forward to park again for the night.

Bruce & Michelle came by and we they took us out to supper. Tom, the above mentioned son in law, told me that I needed to make sure that Bruce paid. We had a very enjoyable evening with Bruce and Michelle and their dog Scout. They came back to the motor home after diner. It is the same as Bruce & Michelle's previous motor home, except one year older.


We left Keith and Lee's and started south to the Border. With Keith and Lee travelling in just their van, they went on ahead and we agreed to meet on the other side of the border. When we got to the border, they took our green onions. Then, we had to pull over to have a inspection done. It seems they were going through all of the snow bird RV's. It took about 45 minutes and we were on our way. We found Keith and Lee at the scheduled mall and off we went again.

Wednesday, we travelled part of the day with Keith and Lee and then headed over to Portland. We are going to get new tires for the Motor Home.

We arrived early afternoon and got our spot at the Jantzen Beach RV park located in north Portland.


Time to leave. Got up this morning and it is time to head out. We left the resort and went to town to get diesel and gas for the car. Hooked up and started down the road. This was the first time that Susan had actually ridden in the front seat of the motor home. She said that it felt like a boat. Up, Down, Up, Down, etc..

Before we got to Banff, we had already experienced our first bit of sleet. I think this trip is going to be interesting.

We stopped to visit with Jim and Caroline in Sicamous before we went to Sorento. I decided that I wanted to get some fuel and stopped in Salmon Arm. The pump clicked off at $50.00. I then put another $50.00 in before we "full". We got to Sorento (Keith & Lee's home) before dinner.

By the weekend, it is supposed to be above freezing.


It is too frickin Cold! 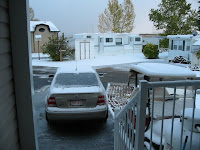 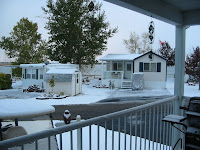 These are pictures from the front door of the park model.

I did not want to do it, but I think I am going to have to winterize the motor home before we leave. In previous years, when we were living in the fifth wheel, it got this cold. But the difference was that we were in the unit and knew what the heat was doing. We just had the propane tank filled, and it looks like we will be filling it again before we leave.